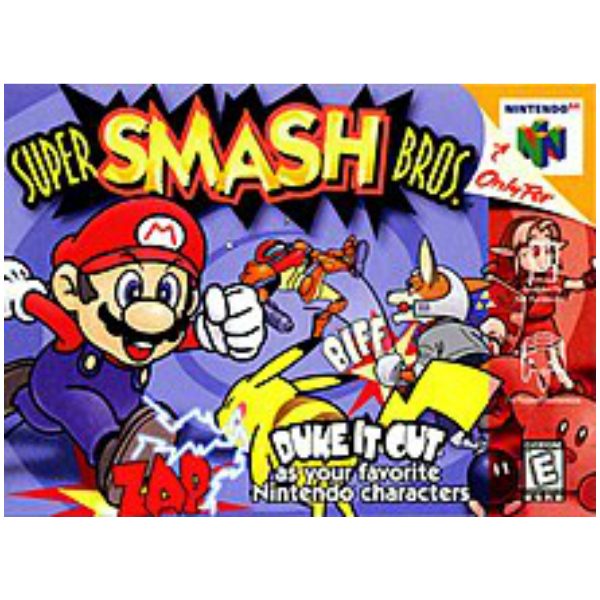 Item is tested and functions as intended. Item shows very light wear from typical use. There is a light scratch in the middle of the label. Please see all provided photographs for a visual representation of the item you will receive.

Super Smash Bros. is a four-player brawler that pits popular Nintendo characters in comical combat situations throughout well-known locales. Fighters include Mario, Link, Donkey Kong, Yoshi, Samus Aran, Kirby, Fox McCloud, Pikachu, and four bonus characters waiting to be unlocked. You’ll battle outside such venues as Hyrule Castle, Yoshi’s Island, the Congo Jungle, Planet Zebes, Sector Z, Peach’s Castle, Dream Land, and Saffron City. Gamers can brawl their way through the single-player mode, or challenge up to three friends in four multiplayer game types: “Stock” (limited number of lives), “Stock Team” (teams share limited lives), “Time” (knock off as many players as you can within the time limit), and “Time Team” (timed team battles). The single-player option features bonus rounds, boss battles, and unusual fighting situations across 11 levels. Players will square off against multiple Yoshis, try to knock over a gigantic Donkey Kong, and even slug it out against an enormous hand. In addition to each character’s distinctive moves (such as Mario’s fireball or Samus Aran’s screw attack), various weapons and power-ups can be used in each stage. These items appear randomly and include beam swords, baseball bats, fans, turtle shells, and hammers. The goal throughout each stage is to knock rival characters completely off the playing field by using basic moves such as throws, shields, projectile attacks, and melee attacks. Progress is automatically saved to cartridge, and the Rumble Pak accessory is supported for vibration feedback.