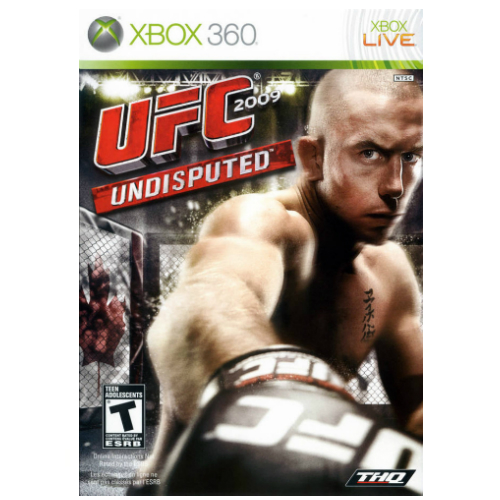 Item does not include game manual but it does include original case. Case has some slight shelf wear. Disc has been professionally resurfaced and has a mirror like finish with no scratches. Some minor buffing markings may remain. Please see all provided photographs for a visual representation of the item you will receive.

The UFC 2009 Undisputed Game – Xbox 360. So you want to be a fighter! UFC 2009 Undisputed is an explosive fighting game detailing the action, intensity and attitude of the Ultimate Fighting Championship (UFC). Featuring an authentic and comprehensive UFC atmosphere, including an extensive roster of the best mixed martial arts fighters in the world, players will push the envelope with a powerful new game engine and put their best fighting disciplines to the test in the world famous Octagon. Take your best shot: UFC 2009 Undisputed is as real as it gets! GAME FEATURES: AUTHENTIC UFC PERSONALITIES: Explore a deep roster of more than 80 top names in UFC competition across all weight divisions and enter the Octagon surrounded by the sport’s popular commentators, announcers, referees, trainers, Octagon girls and more.PHOTOREALISTIC MODELS AND EFFECTS: Absorb the world of UFC as it appears on television with photorealistic fighters who breathe, sweat and move like their real-life counterparts. Players will also experience ripple effects across the faces and bodies of their fighters from the impact of devastating punches and kicks.CONSTANT CONTROL: Gain the upper hand in matchups with a brand new fighting game engine designed specifically for next generation systems. Emphasis on innovative, responsive and easy-to-play controls will give players unparalleled command of their fighters in the Octagon.FIGHTING DISCIPLINES: Take down opponents and get the submission with a variety of mixed martial arts disciplines, including Judo, Muay Thai, Wrestling, Kickboxing, Boxing and Brazilian Jiu-Jitsu.CREATE-A-FIGHTER: Jumpstart the career of a future champion by customizing his physical appearance and attributes, learning new fighting techniques to use in the Octagon and managing his training process through attributes such as strength and cardiovascular health.CAREER MODE: Develop attributes, perfect moves and fight for entry into the UFC Hall of Fame.PLAYERS: 1-2