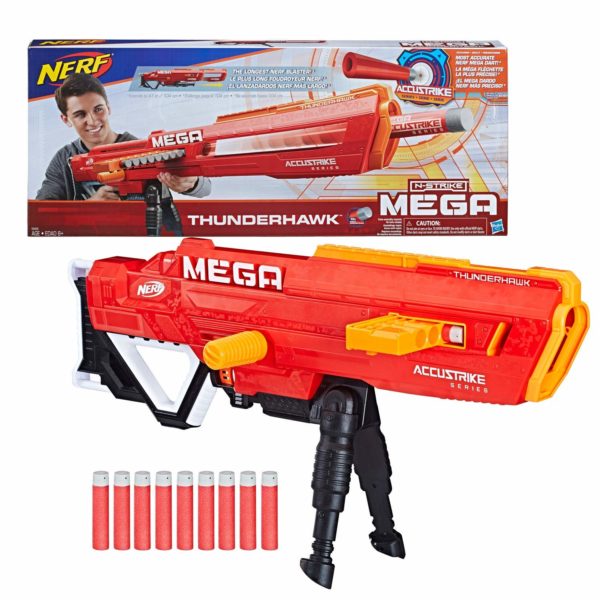 Blast the most accurate Nerf Mega darts with the first Nerf Mega AccuStrike blaster! The Thunderhawk blaster comes with 10 AccuStrike Nerf Mega darts designed for accuracy. Go long and go strong on the battlefield with the Thunderhawk blaster — it’s the longest Nerf blaster of all, measuring 41 inches (1 meter) when extended. Slide the barrel to adjust the length, load the 10-dart clip into the blaster, and get ready to take on opponents with bolt-action blasting. Carry it into battle when the action demands mobility, and use the bipod to stabilize it for distance shots in a fixed position. Part of the AccuStrike Series that features the most accurate Nerf darts*, the Thunderhawk blaster brings AccuStrike accuracy to Nerf Mega battles! Nerf and all related properties are trademarks of Hasbro. Includes: blaster, bolt (2 pieces), 10-dart clip, 10 darts, and instructions. CAUTION: Do not aim at eyes or face. TO AVOID INJURY: Use only darts designed for this product. Do not modify darts or dart blaster. *Accuracy based on test data comparing precision and repeatability of darts fired under controlled conditions at target 30 feet (9 meters) away. See Nerf.com for details. Ability to hit target will vary depending on user’s skill, dart condition, and other factors.