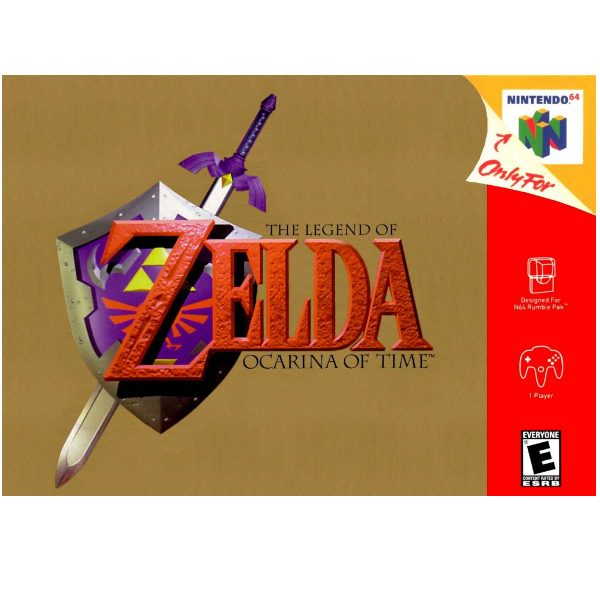 The Legend of Zelda: Ocarina of Time Nintendo 64 Cartridge Only N64

Nintendo’s acclaimed action role-playing series makes its Nintendo 64 debut as a 3D adventure that transforms the land of Hyrule into a dynamic, fully interactive world. Ocarina of Time is the first Zelda game to be played from a third-person perspective set behind the elfin character of Link, necessitating a new control scheme. Link can now lock onto his targets, allowing him the freedom to move around the environment while the camera remains trained on the selected enemy. Jumping is automatic when Link approaches a ledge, and weapons or items can be freely assigned to the controller’s yellow buttons for quick access.

The storyline follows Link’s maturation from a young boy to a determined adult, as he journeys across the land to help those in need and to fulfill his destiny. Link will be able to acquire several items from the famed series, including a bow, which switches the perspective to a first-person view, bombs, a boomerang, and the hookshot. New to the game is the titular ocarina, a musical instrument whose songs can transport Link to different locations, change day into night, and more. He will even be able to summon a horse named Epona to make traveling the expansive world easier.

As Link explores his world, he will encounter numerous quests to complete on behalf of the local residents and participate in an assortment of mini-games, from horse racing to fishing. Since the developers were intent on retaining the same feel as in previous Zelda games, players will be required to solve various environment-based puzzles while delving into dank dungeons, whether it’s lighting torches or shooting targets with the bow. Each dungeon culminates in a cinematic boss encounter until Link eventually confronts his (and Zelda’s) nemesis, the evil Ganon.