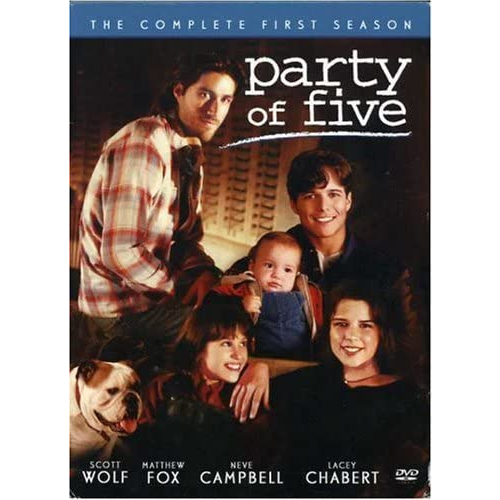 Get behind the scenes as never before in the new 9-part featurette ‘A Look Back’ with all new interviews with the cast and crew!

See how the show was created in ‘A Family Album’ featurette

In its seven-year run on television, Party of Five managed to portray extreme emotions in a contained, tasteful, and level-headed way without sacrificing poignancy or richness. Aimed at a teen audience but with crossover appeal to most viewers, the series dealt with recurring themes of loss and disappointment, made all the more interesting because Party of Five‘s major characters, especially in season 1, are youthful siblings coping with the recent deaths of their parents in an automobile accident.

Shocked into a beyond-their-years awareness of the fragility of ordinary life and the importance of loyalty and loving bonds, the Salinger offspring–24-year-old Charlie (Matthew Fox), high schoolers Bailey (Scott Wolf) and Julia (Neve Campbell), 11-year-old Claudia (Lacey Chabert), and baby Owen (various infant actors)–bring a deeply felt, sometimes desperate gravitas to lesser but still significant misfortunes in relationships, peer pressures, and ambitions. On top of that, each has to take on responsibilities beyond their experience–hiring nannies, raising money for mortgage payments, etc.–and make sacrifices robbing them of formative experiences. Charlie, accustomed to adult freedom, has to rejigger his plans and move back home as a surrogate, and often resented, parent. (If he doesn’t do this, his brothers and sisters could be separated and sent to foster homes.) Ultra-responsible Bailey, with little time for homework, buddies, or girls, loses perspective and gets hung up on an older, appealing nanny (Paula Devicq). Top student Julia’s academic career fades as she seeks a second family among undeserving thrill-seekers. Claudia, a gifted musician, pawns her violin.

Despite all that drama, the essence of Party of Five is the Salingers’ homing instinct, the way they survive internal and external conflict to find their way back to reassuring family rituals–among them weekly (free) dinners at the restaurant their late father owned. The 22 episodes on six discs in this boxed set typically test the Salingers’ hopes, dreams, and mettle, and while stories can certainly be unsettling, a viewer is never left with serious worries that things won’t turn out all right. Among the highlights are “Homework,” in which Julia, having made plans to attend a party rather than salvage her failing grade in English lit, stays home instead to save Bailey’s bacon by writing his difficult term paper. The powerful “Thanksgiving” concerns a face-to-face meeting between the Salingers and the drunk driver (John Rubinstein) who killed their parents. Most memorable is a suite of episodes featuring Megan Ward as Bailey’s girlfriend, Jill, a possible drug addict whose fate rocks the startling season finale, “The Ides of March.” –Tom Keogh