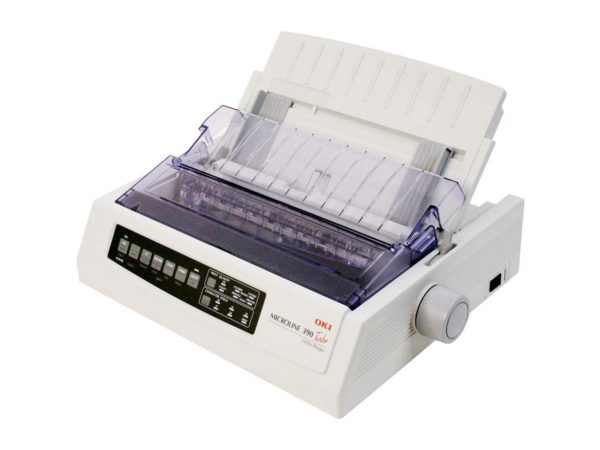 This unit is in good working condition, ships in original box/styrofoam. Printer is in great condition, very clean, minimal signs of use. We have tested and verified that this item functions as it should. Includes power cable. No USB or serial cables included. No other accessories, drivers or items are included with this listing. Please see all provided photographs for a visual representation of the item you will receive.

On the fast track of impact printers, the OKI 62415901 Microline 390 Turbo is in the passing lane. Its Tank Tough endurance – in the OKI tradition – will keep you productive long after most of the other printers in its class have retired. And its combination of versatile paper handling, performance and speed can’t be matched. Whether it’s called on to handle long print runs or a single piece of letterhead, an envelope or a spreadsheet, in the office or on a counter, the ML390 Turbo is the way to go. This 24-pin dynamo excels in dedicated forms printing, turning it out equally fast and precise with pin feed or cut sheet stock.

In time trials, the ML390 Turbo clocks speeds up to 30% faster than its closest competitor – with a mode that can kick out reports at an impressive 390 characters per second. Even the Letter mode is faster than the competition! The ML390 Turbo printhead’s lightweight samarium cobalt magnet and powerful, spring-activated pins deliver a strong punch and the expandable gap between the printhead and platen easily seats 4-part forms. In fact, it can accept stock that’s up to twice the thickness its nearest competitor can accommodate. For stiff card stock or labels, its bottom feed provides a short, straight paper path to keep even the most difficult jobs running smoothly.

The ML390 Turbo is a dedicated forms printer that also turns out professional-looking presentations, proposals and correspondence. With three scalable fonts, you can express yourself in 8 to 64-point type. And you can be confident that your mailing envelopes will be equally presentable – and scanable – when you select any of the eight resident bar code fonts, including PostNet. The printer’s 24-pin printhead design will keep your print images – text and graphics – sharply defined over its 200-million character life.

In addition to superior-looking output, you want a printer that won’t waste a sheet of paper or a single form. The ML390 Turbo has an auto-tear feature that accurately positions continuous forms for a clean tear at the perforation – eliminating wasted forms. You’ll also look good in any environment: the ML390 Turbo supports Microsoft Windows 95, Windows 3.1, 3.11, Windows NT 3.51, UNIX and Novell Netware, so it’s compatible with virtually all custom and off-the-shelf software.