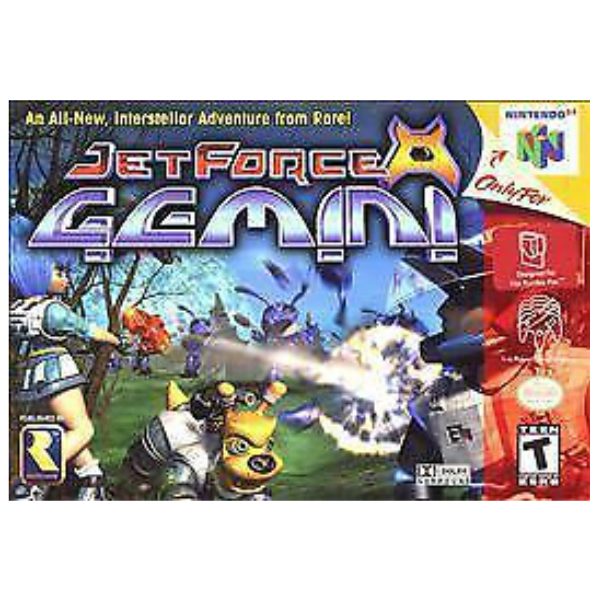 Rare’s sixth game on Nintendo 64 has you playing as a young man, his twin sister, and a robotic dog in an effort to stop an evil tyrant named Mizar and his insectoid army. Not all characters are playable at once, however. The three members of the Gemini Squadron have been separated from one another, so it’s up to you as Juno, the male hero, to find Vela and Lupus somewhere on the planet. The protagonists feature separate routes throughout the game as well as unique abilities. You’ll eventually explore all routes with each character to attain special powers, reach new areas, and fight more powerful enemies.

The action is played from a third-person viewpoint as you fight swarms of insects using your standard-issue Jet Force pistol. As you make your way through the game’s 15 worlds, you’ll acquire more powerful weapons like a rapid-fire machine gun, sniper rifle, plasma shotgun, heat-seeking shuriken, and devastating cluster bomb. The battles with the alien insects, referred to as drones, are a key part of Jet Force Gemini, since you cannot progress unless all hostile threats within the area are eliminated. Once you’ve defeated the remaining drones, a sealed door will open up and you’ll be able to explore more of the level.

In addition to the shooting action, players will have to solve various puzzles, leap across platforms, and converse with characters such as Floyd, a flying robot. Once activated, Floyd can be controlled by a friend in the two-player Cooperative Adventure mode. The 256-Megabit cartridge also features three multiplayer modes: Battle Mode, Racing, and Target Practice. Battle Mode has up to four players hunting each other on a split screen, while Racing features hovercraft competitions across multiple laps and timed scenarios. The third multiplayer mode, Target Practice, is played from a first-person viewpoint as you quickly shoot down drones emerging from the scenery.