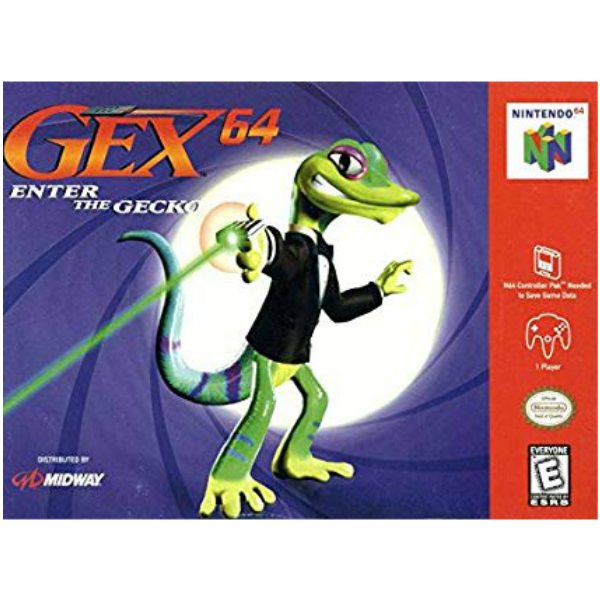 One day, two secret agent goons showed up at Gex’s doorstep. They inform him that Rez is back and looking for vengeance; the evil monster is planning to destroy the Television Realm once more, and possibly the world. When Gex tells them that he’s retired and doesn’t care, one of the goons hits the gecko on the head and takes him to a secluded place.

When Gex comes to, the mystery men plead with the gecko to take the cash and help destroy Rez for good…or at least make him disappear. With that incentive (the cash), the wise cracking lizard slips into his special agent suit and plunges headfirst into the Television Realm. Watch out, Rez – Gex is back!

Each level in the Television Realm is a sarcastic parody of actual television programs/movies of new and old. One level has a Star Wars theme while others are rooted with Kung Fu inspiration; the variety is all over the map. Depending on what the level theme is, Gex will choose appropriate attire. For example, on the prehistoric channel, the gecko puts a bone through his nose and dons a leopard-skin outfit. During the Kung Fu levels, he talks like a karate master and wears a red butt-kicking uniform.

Like the original Gex, HBO comedian Dana Gould is back as the voice of Gex with an all new arsenal of one-liners. With 500 in all, he takes stabs at Austin Powers, Scooby Doo and his hippie sidekick Shaggy, and even George Burns. Additionally, each level has its own unique sayings – expect many horror-filled cliches during the Scream TV levels!

Gex: Enter the Gecko gives players over 125 different maneuvers. Gex can destroy his foes with a barrage of tail attacks, karate kicks, and tongue whippings. He can also climb on walls/ceilings, boost himself up on ledges via tail, and eat bugs. A Memory Card can be used to save mission data and remote controls that have been collected.