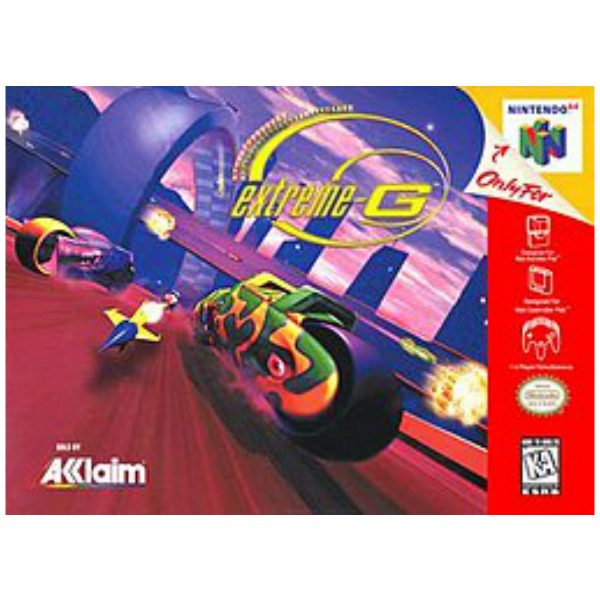 In the tradition of F-Zero and Wipeout comes Extreme-G, a sci-fi racer with sleek two-wheelers instead of hovercraft. Players choose one of eight armored cycles, each rated in acceleration, speed, handling, shields, and weapons, before taking a high-speed spin on one of 12 twisting, looping tracks. Three speed settings dictate the level of challenge involved with each race, but solo players can get a feel for the controls in the Practice, Time Trials, and Shoot-Em-Up modes.

The main focus of play is the “Extreme Contest,” where you’ll advance through three increasingly difficult circuits and a total of 24 races. Players will zip through ancient temples, nighttime cities, industrial complexes, and more while seeking out shortcuts and power-ups to gain an edge on the competition. Scattered across each track are mines, rockets, homing missiles, warps, fusion blasts, and shields, all upgradeable by collecting more of each type. Extreme-G also includes four-player support in four distinct modes: Head-to-Head, Flag Game, Cup Race, and Battle Arena.