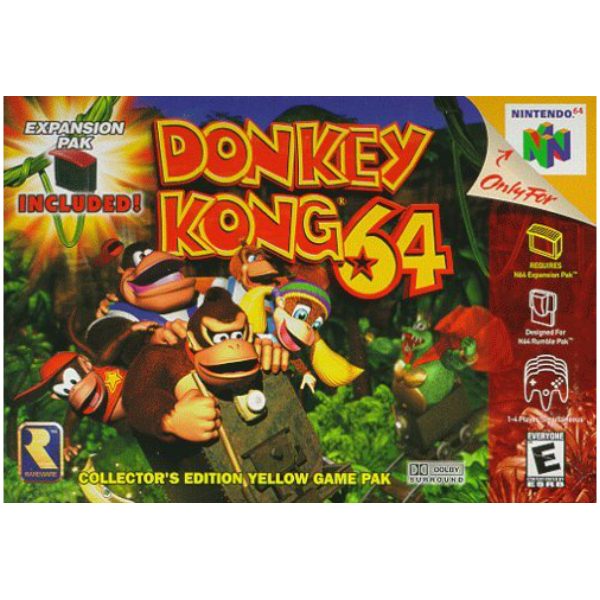 Those bumbling Kremlings, the crocodile servants of King K. Rool, have managed to smash the motorized island stronghold of their enormous army near Kong Isle. Okay, so the plan hit a snag. It wasn’t as if the whole mission had to be scrapped.

That’s the beauty of world domination, you can just start anywhere you want until the whole thing is yours. In this case, the starting point was Kong Isle, home of those bloody aggravating apes that single-handedly destroyed years of thoughtful planning on the part of His Majesty.

That was all about to end. With a single shot from the Blast-o-Matic, Kong Isle would be reduced to a rather large pile of squished bananas. Yet the gun wasn’t quite operational, a characteristic of so many enormous weapons of mass destruction before it, and the King was beside himself with grief.

How could he be so close and yet so far? The Kremling army saw their beloved K. Rool moping about the fortress and hatched a plan: while the technicians worked on bringing the weapon up to speed, they would swim out to capture as many Kongs and Golden Bananas as they could.

In what is to be Nintendo’s last high-profile release before the millennium, Donkey Kong 64 continues Rare’s adventure series that began on the Super NES in 1994. The leap in technology from 16- to 64-bit means this rendered ape has been given the full 3D treatment, complete with eight polygonal worlds and special effects that require the use of an Expansion Pak in order to play. Since this is the first game on the system that will not run without the peripheral, Nintendo has bundled the 4MB memory upgrade along with the game for an MSRP of $59.99.

As Donkey Kong, your first task is to rescue your nephew Diddy from imprisonment in a world called Jungle Japes. Along the way, you’ll be able to swing from vines, slap beavers silly, bounce on Kremlings, blast through barrels and visit dear ol’ dad Cranky for some secret potions that will give you added moves (which apply to all characters you’ll play as).

These moves won’t be free, however, as you’ll need to cough up coins to satisfy your irate primate father. Also on hand is Funky Kong, who has dabbled in the weapons business long enough to offer each character a special gun (for a reasonable fee, of course). Once acquired, the selected weapon will be able to fire coconuts, peanuts, feathers, grapes or explosive pineapples, depending on the character. In addition to Donkey Kong and Diddy, players will be able to find and rescue Tiny Kong, Lanky Kong and Chunky Kong.

Subsequent worlds will have players exploring the Angry Aztec, Frantic Factory, Gloomy Galleon, Fungi Forest, Crystal Caves, Creepy Castle and Hideout Helm on their way to battle K. Rool. Besides Kremlings, each world is filled with 100 bananas to collect, various Banana Bunch Coins, special Golden Bananas that open up new worlds, explosive oranges that can be thrown like grenades, and five pieces of a blueprint that will help a sneaky weasel named Snide determine how to destroy K. Rool’s doomsday device.

Donkey Kong 64 also requires cooperation with the friends you rescue, since certain coins and bananas are color-coded to match a particular ape. Each world also offers several puzzles that can only be solved by using a specific character, whether it’s opening up a gate by firing Donkey Kong’s Coconut Cannon or using Chunky Kong’s massive strength to move boulders.

Every banana-yellow cartridge offers three built-in save files that let players resume their progress after turning off the system. The game also supports the Rumble Pak accessory to provide vibration feedback during play, and even includes a separate Battle mode for four-player simultaneous action. As you progress through the main game (Adventure mode), you will be able to unlock two types of multi-player contests: Monkey Smash and Battle Arena.

Monkey Smash involves competing against up to three