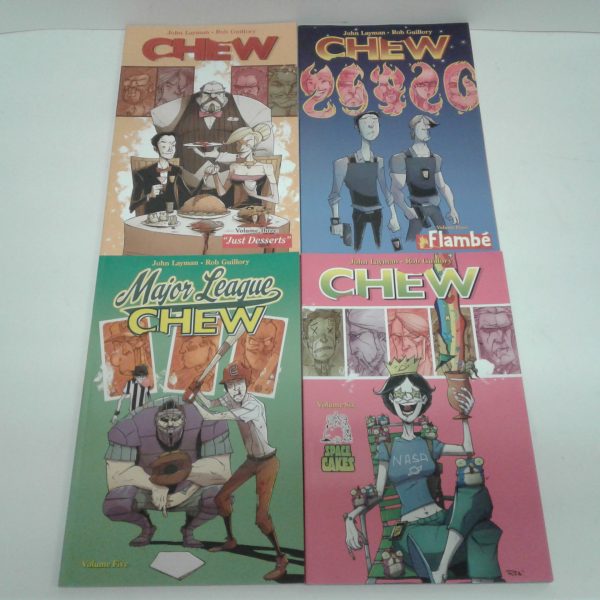 Item is an open box product. All four trade paperbacks are 1st prints. Item may show signs of handling/unpacking/assembly but does not show any evidence of usage. Please see all provided photographs for a visual representation of the item you will receive.

Things are looking up for Tony Chu, the cibopathic federal agent with the ability to get psychic impressions from the things he eats. He’s got a girlfriend. He’s got a partner he trusts. He even seems to be getting along with his jerk boss. But his ruthless ex-partner is still out there, operating outside of the law, intending to make good on his threats against Tony and everybody Tony cares about. It’s just a matter of time before their investigations collide, blood spills and, inevitably, body parts are eaten!

These are strange times for Tony Chu, the cibopathic federal agent with the ability to get psychic impressions from the things he eats. Strange writing in extraterrestrial script has appeared in the skies of Planet Earth ? and stayed there! People don’t know if the end days are upon them or not, but they don’t seem terribly concerned about the laws of the FDA, and what was once the most powerful law enforcement agency is rapidly descending into irrelevancy. So where does that leave the FDA best agent, Tony Chu?

Tony Chu — the cibopathic federal agent with the ability to get psychic impressions from what he eats — has been kidnapped! He was ambushed, knocked out, brought to a remote location, and bound securely. His captor intends to feed Tony from a menu of his choosing, to find out what Tony can see, in order to learn from him. His daughter, Olive, has been kidnapped for the exact same reason. Two kidnappers, two captives, and two very different outcomes.

While Tony Chu ? the cibopathic federal agent with the ability to get psychic impressions from what he eats ? clings to life in a hospital ICU, his twin sister Toni steps up to take center stage. Toni is cibovoyant, able to see the future of anything she eats, and, lately, she?s seeing some pretty terrible things. Presenting a new storyline of the New York Times Bestselling, Harvey and multiple Eisner Award-winning series about cops, crooks, cooks, cannibals, and clairvoyants.